A few photos from our trip to Central Oregon. I have some work to do to identify the wildflowers. 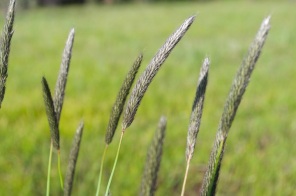 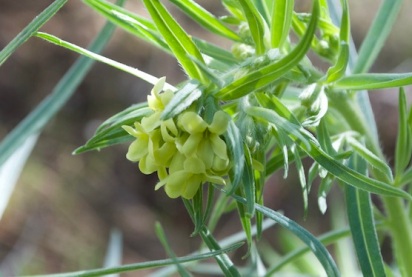 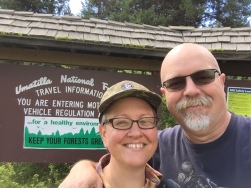 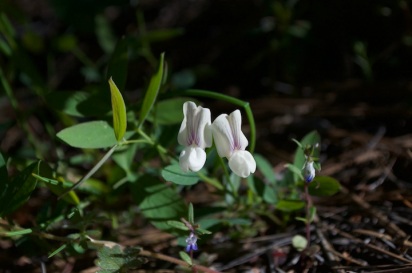 WordPress.com is excited to announce our newest offering: a course just for beginning bloggers where you’ll learn everything you need to know about blogging from the most trusted experts in the industry. We have helped millions of blogs get up and running, we know what works, and we want you to to know everything we know. This course provides all the fundamental skills and inspiration you need to get your blog started, an interactive community forum, and content updated annually.

I ended up with a handful of photos that didn’t quite fit in any particular post but were still worthwhile. I hope you enjoy them.

The lion and unicorn at the Main Gate of Hampton Court Palace.

A London Police Box (I was hearing the Doctor Who theme song in my head.)

We spotted some lovely wisteria in the Cotswolds. I like the pull chain for the door bell on the right. 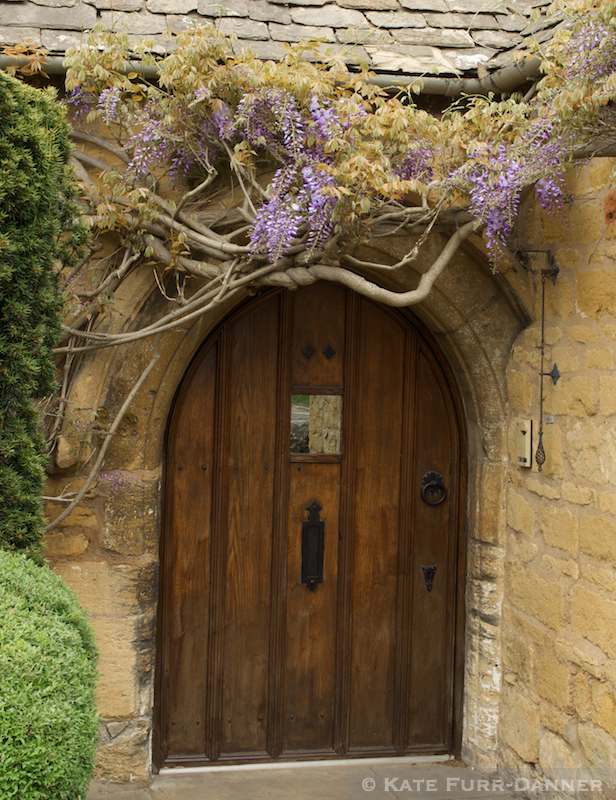 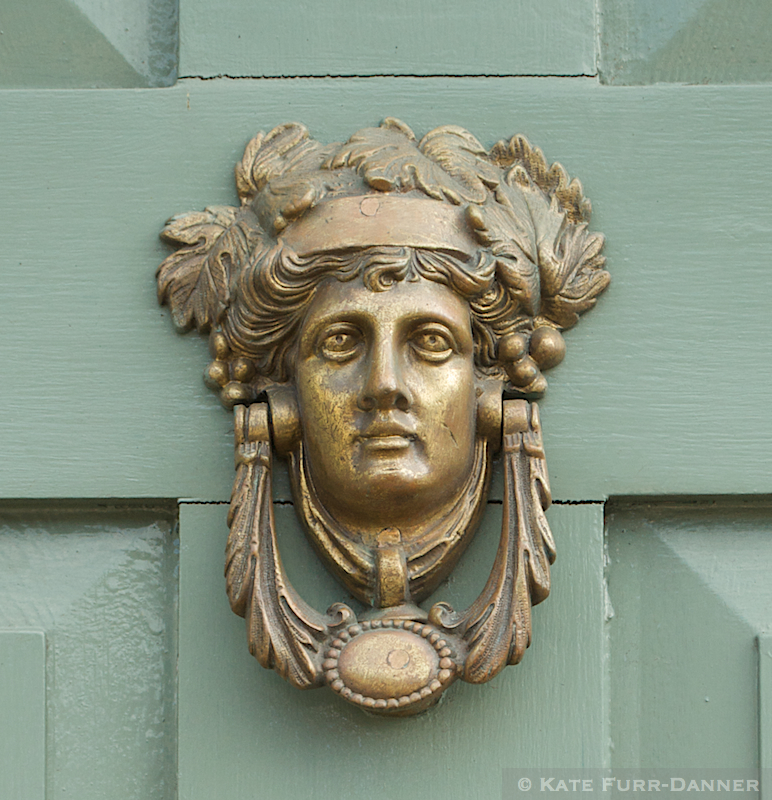 I believe these purple flowers we found in Broadway are aubrieta. 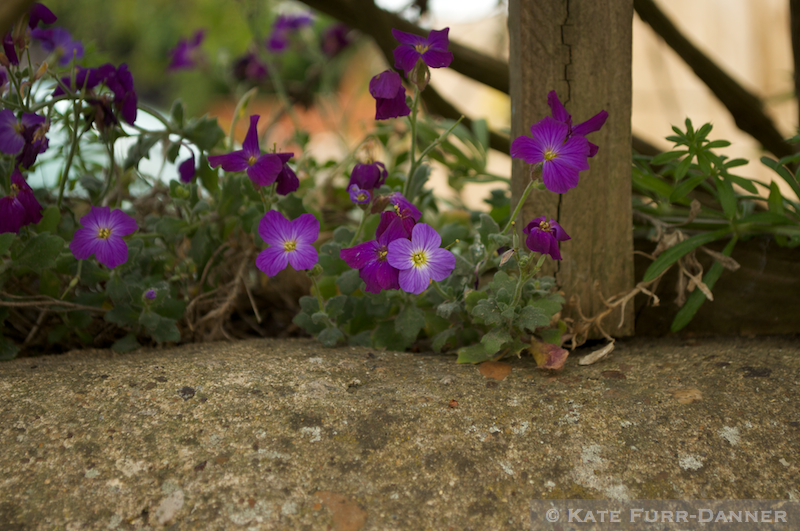 These corbels were carved with great dragons.

I’d really like to figure out what these flowers are. They looked so vivid in their stone planter. 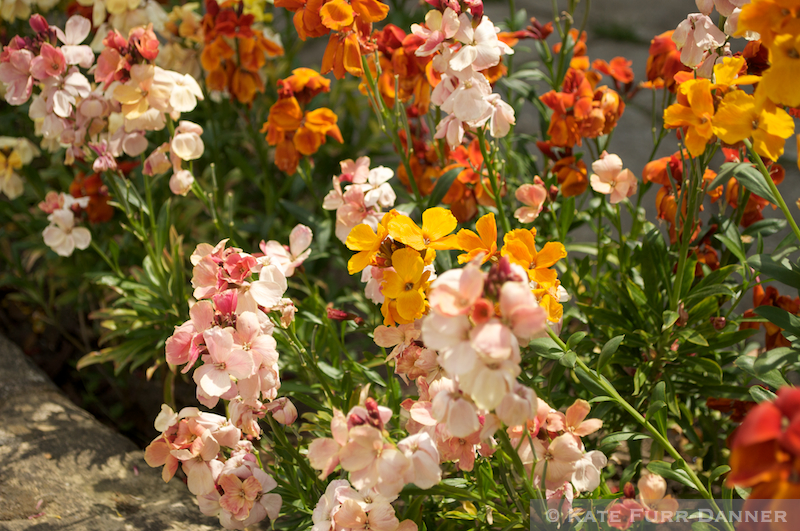 Growing up, I had a neighbor who forged ironwork like this for his doors.

This roadside garden bed in Burford was packed full with tulips and other flowers. 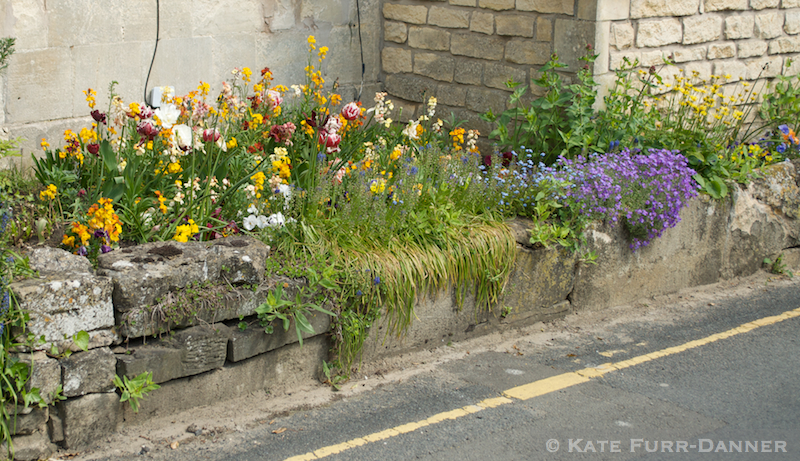 I’m not sure this lion door knocker in Chipping Campden is the most welcoming I’ve ever seen. 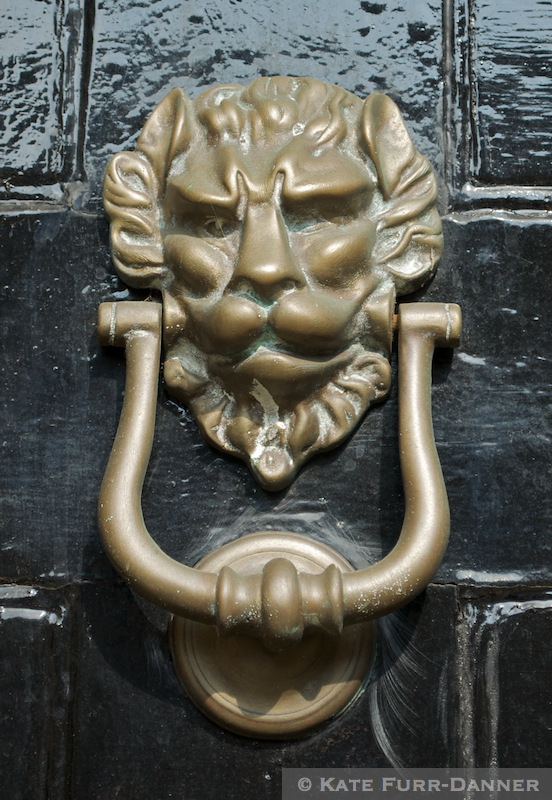 Another, slightly less aggressive lion was in Burford.

But maybe if you wanted people to stay away and the scowling lion wasn’t enough, you could install this imposing horned creature we found in York. 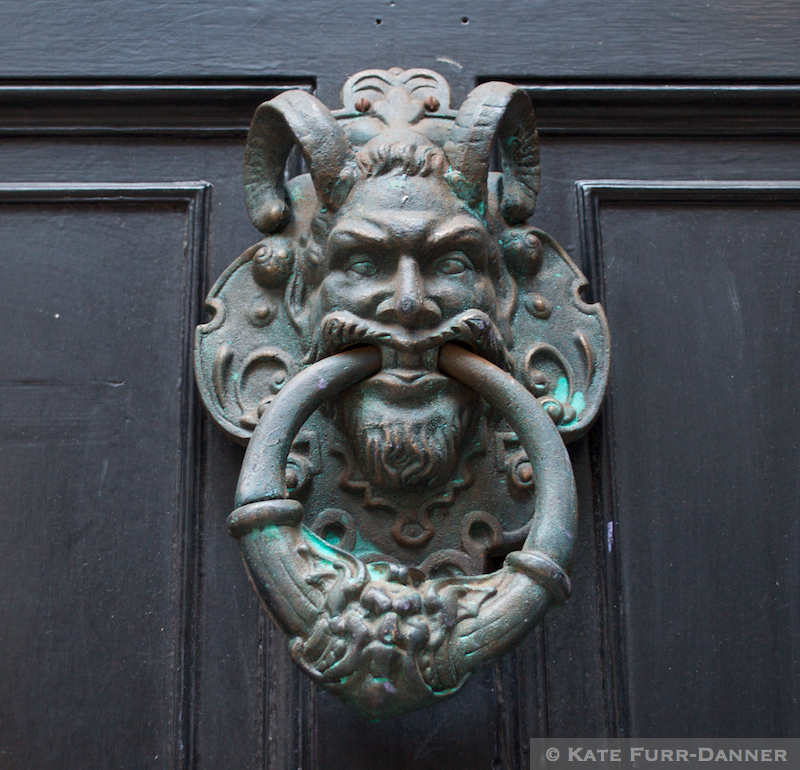 I like the stone planter with the crimson tulips at Plum Tree Cottage in Burford. 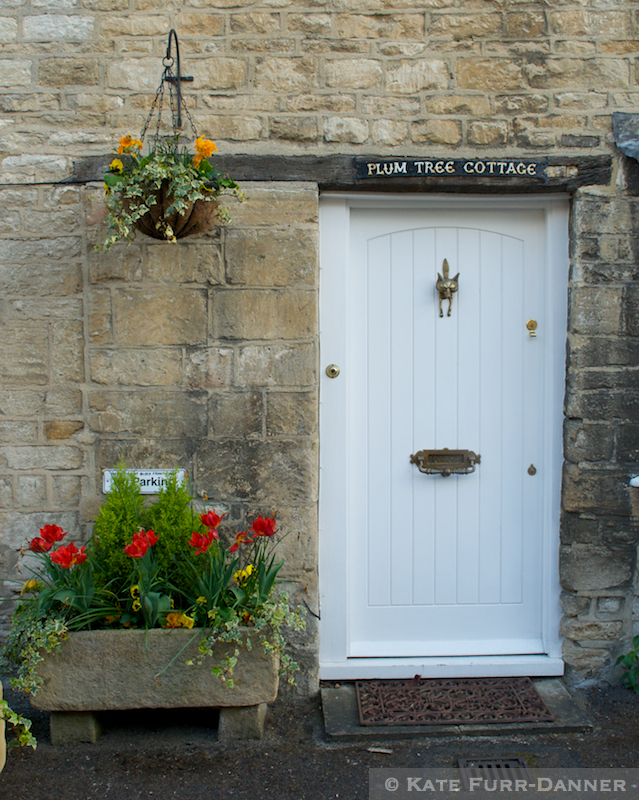 We found a similar fox door knocker on a different door in Burford.

We saw sailing ships on a number of doors. Now I’m wondering if, historically, there was a correlation between the profession of the resident and the design of the door knocker.

Although a pharaoh probably never lived in Chipping Campden.

These vivid pansies outside the Lygon Arms in Chipping Campden would make a nice addition to my garden. 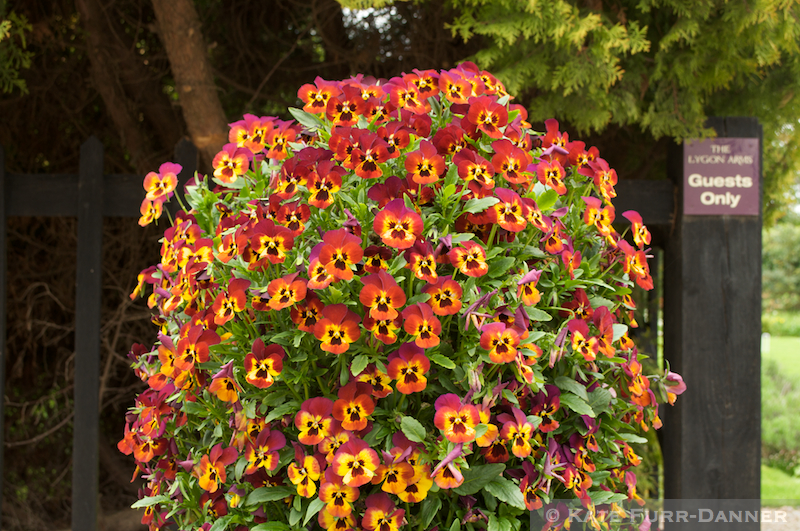 The Great House in Burford had a handsome front entrance. 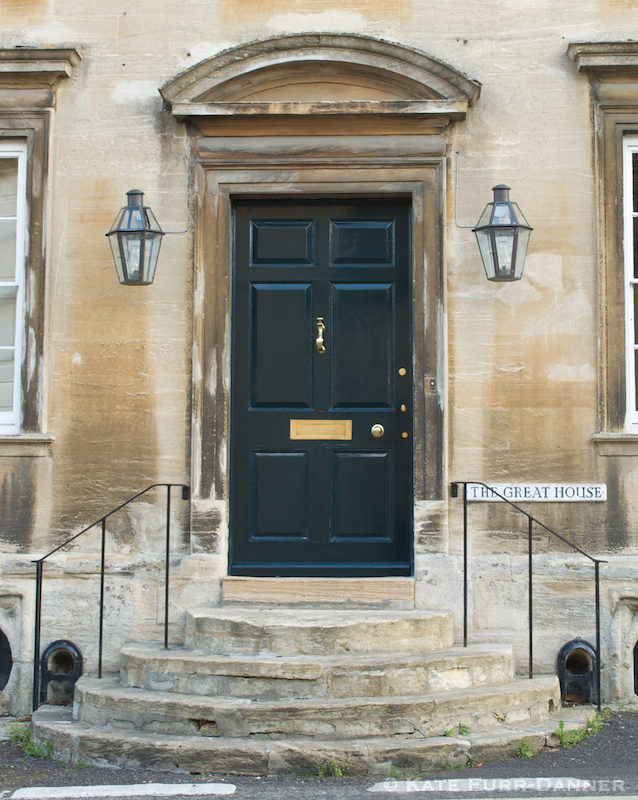 I can’t decide if this is supposed a jester of some sort or maybe a soldier. The handle appears to read “reeping Tom”. Google doesn’t turn up any reliable reference and asks if I meant “peeping Tom”. (I suppose it could be a cultural difference but I don’t think even that would explain why someone would want a peeping Tom door knocker.) 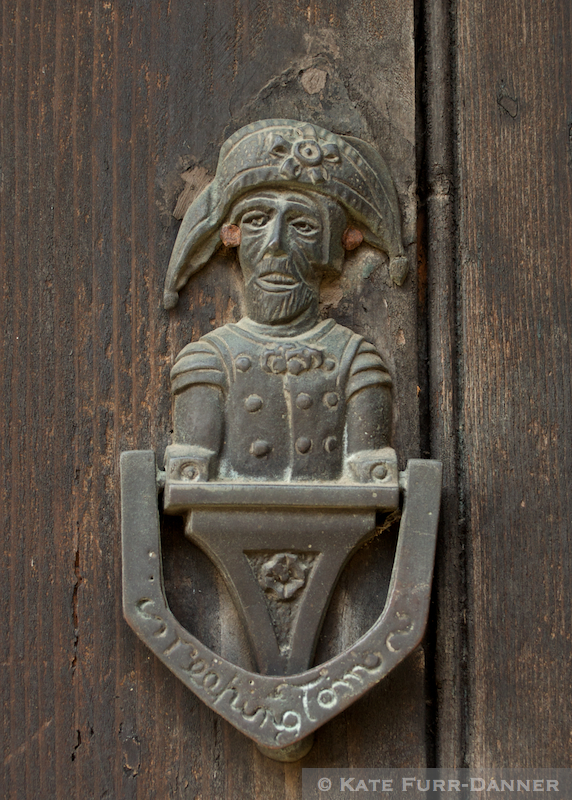 This was a pretty front garden in Chipping Campden. 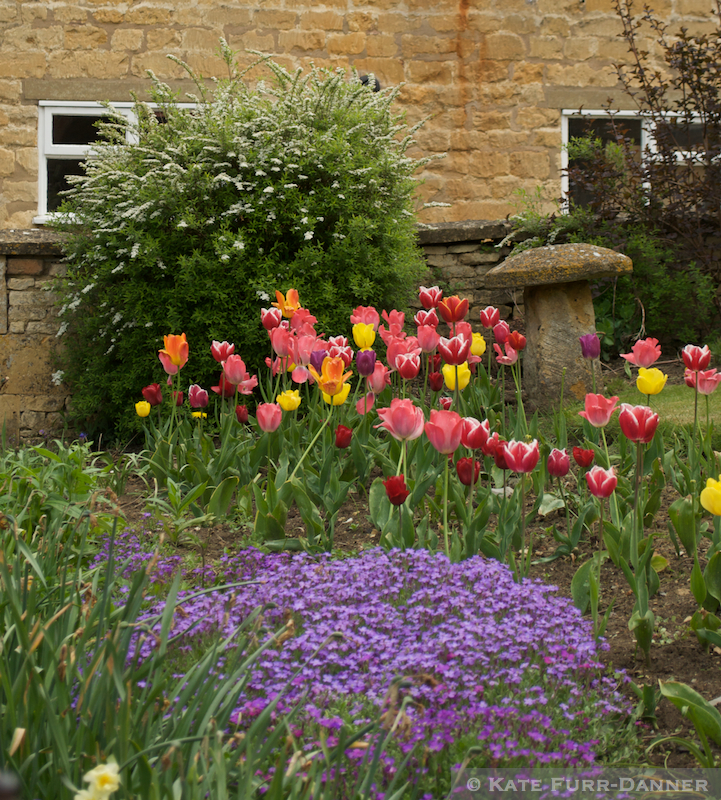 I liked this clever woodpecker knocker.

Tiny flowers like these found a footing wherever a bit of soil had collected on the stone walls.

Hertford Bridge at Oxford University, also know as the Bridge of Sighs. 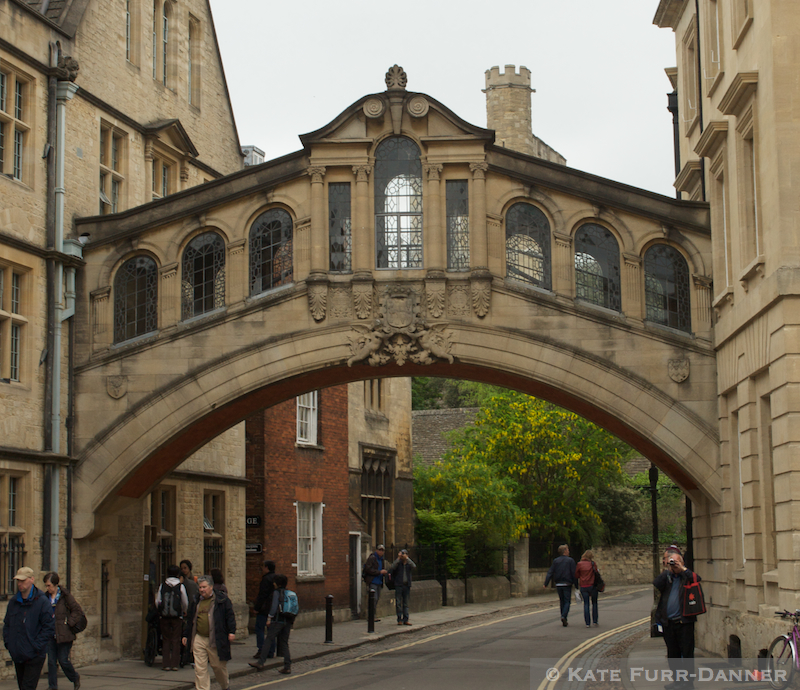 And finally, my stalwart traveling companion and me on our anniversary at the Uffington White Horse, Oxfordshire, England.

So that about wraps it up. We are heading out again in a few weeks – this time to Amsterdam, France and Italy. I’ll be back in school when we return home but I will write up our travels as I am able. Thanks for traveling along with us and thanks for reading.

Click on any underlined date to see previous posts.